I was nervous about this race for a number of reasons. I hadn't done well at last year's event and came away with a case of bronchitis that lasted for a couple of weeks, my legs were still sore from a one hour treadmill interval session  5 days before (traveling for work), and I would be starting for the first time in the front row due to my 6th place in the last BASP race. Being in the front row put a lot of self-imposed pressure on me not to blow it, so I had butterflies the size of my fist flying around inside my stomach as we lined up in the grid for the start.

I took a grid slot just inside of the furthest outside slot because I thought that would be the best position for the first turn, a 90 deg left over a ramped curb onto the dirt. I used my GPS to countdown to when the whistle would blow and got a great start, landing  the hole shot into the first turn. I've never been at the head of a cyclocross race before and so I relied on the CX mantra  "Sprint at the end of road races but at the beginning of cyclocross races." I went as hard and as fast as I could through the short mud section and onto the backside pavement segment, hoping to gap as much of the field as possible as they struggled to navigate around each other.

I had a winner of a previous race right behind me as we came back onto dirt. He tracked me until we came to the first dismount section, a small hill with a couple of railroad ties serving as low obstacles/steps. It was here that he made his move and as I dismounted, he rode his 29er right over the railroad ties and up the hill. He now had a half-bike length gap on me, but I stayed with him and caught him as we encountered the first group of 45+  B stragglers, who had left a minute before us. I wasn't able to pass him as we went through the whoops, over the flyover bridge, or through the newly added sand pit. But, when we came back to the frontside pavement section, I shifted into my big ring and sprinted by him, gaining a  gap.  He caught and passed me again during the middle technical sections of the course on lap two, but I sprinted by him again at the start/finish pavement section. At one point I tried to lose him by taking an untested line on a whoops section. That didn't work out so well, as I slid out in the slight left turn at the top of the climb. I unclipped my left pedal on my way down and while I dragged a knuckle and scraped my shin, I was able to keep moving and keep him from passing me.

On lap three my nemesis got tangled up with another rider in the sand pit and crashed, giving me the lead again. Now another previous race winner on a 29er got on my tail and he and I dueled back an forth over the next couple of laps. I could tell he was getting  tired and decided to sit on his wheel and wait for the finish, where  I would outsprint him. I felt a slight slowdown in our pace and got worried that we might be letting the chasers close in on us. My fears were realized when on the second to last lap, backside pavement section, a racer on a CX bike passed us both and proceeded to put in a gap. I sprinted around the wheel of the 29er and followed  the new leader. I neglected to pre-downshift to the small ring in advance for the upcoming U-turn and when I tried to downshift on the exit I  threw my chain. I was able to recover quickly by riding my chain back onto the big ring, but by then 29er had gotten past me.

I latched onto the two leaders and we moved through slower riders back to the start/finish for the final lap. I felt good here, but did not attack because the pace was high and I thought it would be better to attack in one of the slower, more critical sections. At the backside pavement the leader attacked and I had to sprint around the 29er to follow him. I was about a half a bike length back over the next few sections until we came to the barriers+ run up + sharp left turn. The leader managed to squeak by some slower riders, but I got blocked behind them at the turn and he was gone. I continued to pass slower riders but never quite caught sight of the leader again. I finished 10 seconds behind him in second place, my best finish in 20 years. I am extremely happy to get on the podium and next time I will try to press my advantage further during the middle sections of the race. 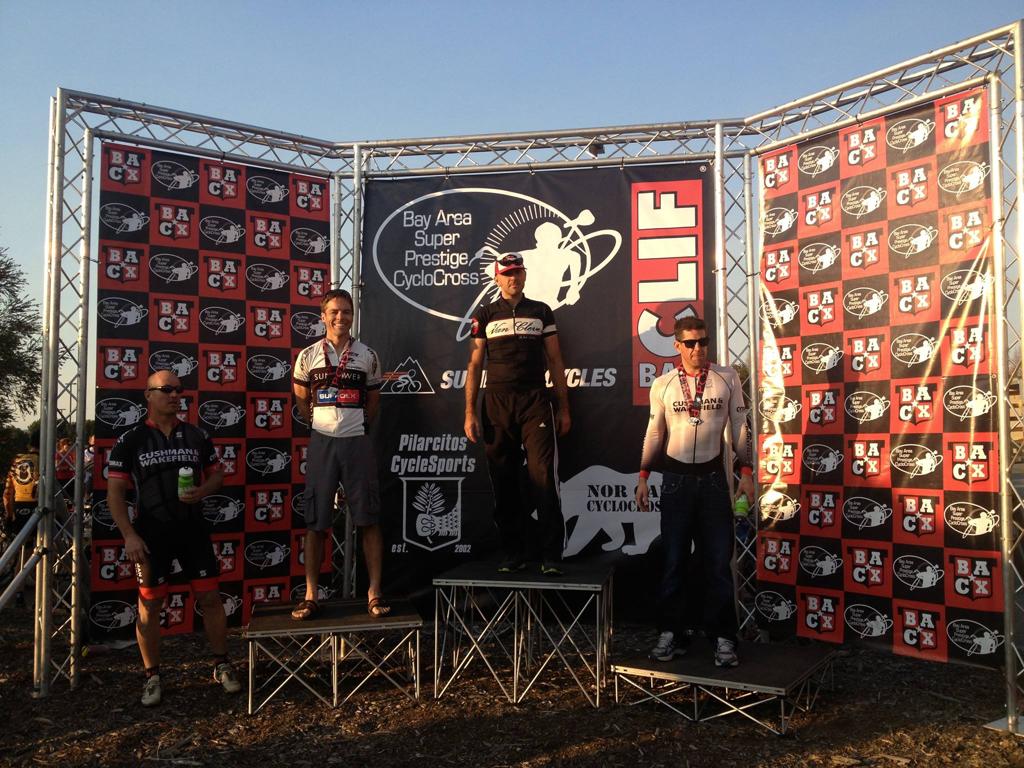